Kanako Kanayama (銀山かなこ Kanayama Kanako) is a character who is the 4th member in MetalliPara.

She is known as Maika Shikane's close friend.

Kanako is officially a creator, and she secretly hides from her mother that she is a bassist. She is very concerned by herself that over the years she played her old bass guitar her father gave it to her before he died, and she will remember everything from him and to her mother and sister.

Kanako is creative at anything, it is her hidden talent to show everyone how talented she is, but shy to show it to anybody.

She is girly, because she loves pink stuff. She also loves any genre of metal, except black and hard rock, she hates it.

Kanako - かなこ is meant in any kanji. 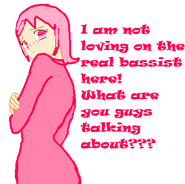 Kanako's reaction that everyone thinks her that she has a crush in secret.
Add a photo to this gallery
Retrieved from "https://metallipara.fandom.com/wiki/Kanako_Kanayama?oldid=612"
Community content is available under CC-BY-SA unless otherwise noted.