Kinzoku Natsume (夏目キンゾク Natsume Kinzoku) is a character who is known as the 5th and last member of MetalliPara, and also is known as the backing vocals, and the band's keyboardist (revealed in episode 5).

Kinzoku is the youngest daughter among the rich family, Natsume, and she realizes that anyone knows that she has a beautiful voice and now wants to be the backing vocalist.

Later on, when Chizuru Genkino first met her, she recruits to be the backing vocals and revealed keyboardist of the band, aside her and Metari.

She has medium-length turquoise hair that has a formed side tail, and has odd eyes, one red and one blue. She wears a white blouse with a ribbon tied in the chest, and a frilly design right below on her skirt. She wears frilly leggings, and has a purple arm warmer. She wears indigo shoes.

Kinzoku is an easy-going girl and is the youngest of the group, and is 12 years old. She began to obsess with heavy metal and rock all the time, especially towards her friends and in every MetalliPara stage. She is very considerate towards her parents and her siblings, and also, she is the most mature of the Natsume family.

Kinzoku - キンゾク or 金属, it obviously means metal, according to her obsession of the favorite genre.

Her name means metallic summer eyes, according to the fact that she loves metal, is because she is a super fan of anything beside rock and thrash.

Kinzoku on the near left. 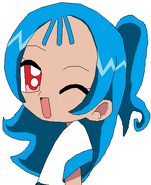 Kinzoku's info.
Add a photo to this gallery
Retrieved from "https://metallipara.fandom.com/wiki/Kinzoku_Natsume?oldid=687"
Community content is available under CC-BY-SA unless otherwise noted.