Shion was a normal girl until she got a PriTicket. She turned into a JPop singer. Her parents despised her, and gave Shion to her grandfather, Tomoi Shikane. She started listening to JPop and wanted to be a JPop singer. Her idol is Yunomi Sayaka from Geokatsu~ko! and she is best friends with her.

Shion appears to have shoulder length blonde hair, and her bangs cover her right eye. She also has a low ponytail and occasionally a braid. She often wears pink and blue. She has a heart on her left cheek.

She is a fan of JPop and is a JPop singer herself. She doesn't like metal, though she respects everyone's opinions.

Maika Shikane  - her sister. They fight a lot about whether Metal or JPop is better. They are still good friends.

Tomoi Shikane - her grandfather. She doesn't speak to him much.

Shion - 潮 is according in Google Translate, it means tide. In fact Jackii is right, her name means a type of flower (Aster tataricus).

Shion and her sister Maika. 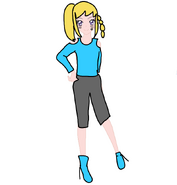 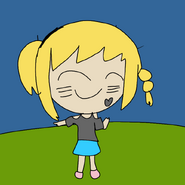 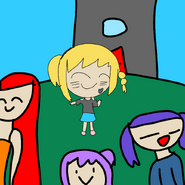 Shion doing that same performance in Geokatsu~ko!, being a major character,
Add a photo to this gallery
Retrieved from "https://metallipara.fandom.com/wiki/Shion_Shikane?oldid=1040"
Community content is available under CC-BY-SA unless otherwise noted.